EL TRIBUNAL DE DERECHOS HUMANOS CONDENA A ESPAÑA : The immediate return to Morocco of sub-Saharan migrants who were attempting to enter Spanish territory in Melilla amounted to a collective expulsion of foreign nationals, in breach of the Convention


The immediate return to Morocco of sub-Saharan migrants who were
attempting to enter Spanish territory in Melilla amounted to a collective
expulsion of foreign nationals, in breach of the Convention
In today’s Chamber judgment1 in the case of N.D. and N.T. v. Spain (application no. 8675/15) the
European Court of Human Rights held, unanimously, that there had been:
a violation of Article 4 of Protocol No. 4 (prohibition of collective expulsions of aliens) to the
European Convention on Human Rights, and
a violation of Article 13 (right to an effective remedy) taken together with Article 4 of Protocol
No. 4.
The case concerned the immediate return to Morocco of sub-Saharan migrants who had attempted
on 13 August 2014 to enter Spanish territory illegally by scaling the barriers which surround the
Melilla enclave on the North-African coast.
The Court noted that N.D. and N.T. had been expelled and sent back to Morocco against their wishes
and that the removal measures were taken in the absence of any prior administrative or judicial
decision. At no point were N.D. and N.T. subjected to any identification procedure by the Spanish
authorities. The Court concluded that, in those circumstances, the measures were indeed collective
in nature.
The applicants’ version of the attempt to scale the barriers towards Melilla was corroborated by
numerous statements, gathered by various witnesses and journalists as well as by the UN High
Commissioner for Refugees or by the Human Rights Commissioner. Lastly, the Court noted the
existence of a clear link between the collective expulsion to which N.D. and N.T. were subjected at
the Melilla border and the fact that they were effectively prevented from having access to a remedy
that would have enabled them to submit their complaint to a competent authority and to obtain a
thorough and rigorous assessment of their requests before their removal
Publicado por Roberto García Fernández en 10:18 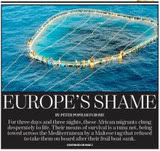